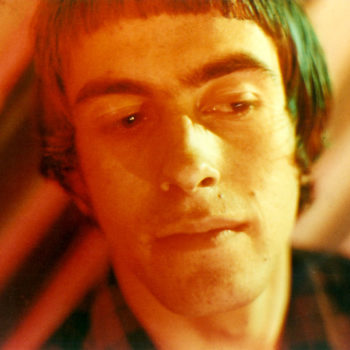 Pete Sears after a couple of years of hard touring. Taken between Sons of Fred sets.

I began play­ing bass and a lit­tle key­boards with the Sons of Fred in 1963…we turned pro in 1964. That’s me with the weird striped jacket on the left. We recorded at E.M.I (later Abbey Road) in Lon­don for the E.M.I. Par­lophone label, and toured all over play­ing six or seven nights a week. We played a few TV shows, includ­ing “Ready Steady Goes Live” and “Thank Your Lucky Stars” and were even mobbed by a large group of scream­ing girls as we came out of a TV stu­dio (I doubt they knew who we were, but we looked like a rock band and were com­ing out of a TV sta­tion) there was a police cor­don and everything…my jacket was ripped up pretty good.
We got into our old Mark 10 Jaguar that was cov­ered in women’s lip­stick (we actu­ally had a lot of fans) and high­tailed it to the M1. It was an old Jag but went like a bat out of hell…we had to hold the stick at 110 mph or it would slip out of top gear.
We per­formed pri­mar­ily R&B music live, but our sin­gles were a bit more pop except for “Baby What You Want Me to Do”.
Not sure where the money went…certainly not in our pock­ets, well not mine anyway

Ray was very inno­v­a­tive and amaz­ing with engines, and some­how always got us to the gig even though our old van would some­times break down in the snow…or over­heat. He once used a women’s stock­ing (which was lying in the van for some rea­son) to fix a bro­ken fan belt. Another time he used a coat hanger to fix the bro­ken bolts no longer hold­ing our drive shaft together (he wound it in and out of the bolt holes and we limped slowly to the gig). We often had to set our gear up on stage in front of a jeer­ing drunken crowd if we got there late, stick­ing bare amp wires into live plug holes by forc­ing a screw­driver into the ground pin. All this on a dark­ened stage and work­ing with 220 Volts. We took turns sit­ting or lying on the amps in the back of the van on long journeys.

Another time we set up our gear (we car­ried our own Selmer PA sys­tem and amps) on the back-side of a revolv­ing stage at Streatham Ice Rink in South Lon­don while another band played their set in front fac­ing the audi­ence. We had every­thing set and all the wires, drums and ampli­fiers in place when we got the sig­nal to begin playing.

As the other band fin­ished their last song, the stage began to slowly turn with us grad­u­ally appear­ing to the audience…supposedly play­ing a song. A tooth­less unshaven old man with a peaked cap and over­alls was run­ning the stage revolv­ing mech­a­nism with a lever off to the side…we already knew he couldn’t stand the site of us…and he was about to prove it. He looked like he’d worked there since the glory days of Vaudeville.

As the stage began to turn, we noticed that one or two of the wires run­ning to the PA sys­tem were get­ting caught up in some­thing and the speaker cab­i­nets were begin­ning to top­ple. We started fran­ti­cally sig­nal­ing to the old man to stop the stage from turn­ing, “Stop, stop” we yelled, “for &%@$ sake stop the stage”.

The old man just kept this lit­tle smirk on his face, stared straight ahead and con­tin­ued to hold down the lever in the on posi­tion. The sit­u­a­tion got out of hand and snow­balled fast…amplifiers came crash­ing down, our legs and arms got caught and tan­gled up in wires, the drums crashed down into a heap on the floor with our drum­mer Tim some­where in the mid­dle. “Stop! stop!”.
We car­ried on slowly turn­ing towards the audi­ence who watched us with curi­ous per­plexed expres­sions on their faces…wondering if it was part of our act or some­thing. Any­way, we even­tu­ally sorted it all out, and apart from a few bruised legs and egos we fin­ished what was left of our set time.

Around 1965 we’d drive down Somer­ley­ton Road in Brix­ton, South Lon­don and groups of African or West Indian guys, mostly Jamaican, would be stand­ing out­side each house with a giant chunk of Hashish each. They’d see a group van and run after us yelling for us to buy from them…“Hey mon…here, here, over here”.

We’d mostly come away with a good deal…I mean a very good deal, but some­times we felt lucky to get out of there with our lives. This all hap­pened a few blocks away from Brix­ton Police Station.

The old build­ings in Somer­ley­ton Road have all been torn down now. My dad used to drive my fam­ily through Brix­ton on his way to the cen­ter of Lon­don from our house in Brom­ley. I was a kid, and I’d hear this amaz­ing music pump­ing at high vol­ume out of “Desmond’s Hip City” record store under­neath the arches. Blue Beat, Skar, Rock Steady then Reg­gae. Every time we drove past the shop I’d open my win­dow so I could hear better…I was mesmerized.

Another time, we were booked to play the pres­ti­gious TV show “Ready Steady Goes Live”. Our man­ager announced to us one day “you boys look too scruffy for TV; I’m going to send you to a Den­mark Street tai­lor and have you fit­ted for match­ing blue suits.” I per­son­ally didn’t see what was wrong with my striped jacket and blue jeans…but hey, if that’s what it takes so be it.

We walked up this small creaky old stair­case to the tai­lors on the sec­ond floor and this lit­tle man, all bent over and look­ing like he belonged in a Charles Dick­ens novel started mea­sur­ing each one of us in turn; writ­ing down our infor­ma­tion in a lit­tle book. He didn’t seem to like us very much, but assured our man­ager that the suits would be ready in time for the big TV show.

Well the big day arrived and of course the suits hadn’t arrived at our office yet. Our man­ager was told they would be dropped off at the TV stu­dios that afternoon…in time for the show, but they still hadn’t arrived for the after­noon dress rehearsal and he started hav­ing a fit, telling us we wouldn’t be able to go on look­ing like we did. It was all very disturbing…and things got quite tense as show time loomed closer and closer and the suits still hadn’t shown up. Well they finally did show up about an hour before our time slot to hit the stage and we all grabbed the brown paper bag that had our name on it…they were tied with old pieces of fray­ing string. We started fran­ti­cally pulling on our suits as the min­utes to air time omi­nously ticked away. Grad­u­ally, one by one, star­tled curses, grunts and swear­ing noises began to fill the room as we strug­gled to get our brand new match­ing blue suits to fit. Slowly, it dawned on us that the idiot tai­lor had either made a ter­ri­ble mis­take, or had pur­posely got all our mea­sure­ments com­pletely mixed up. My trousers were too long and my sleeves too short. The shoul­ders of Ray’s jacket, he was a big fel­low, were too nar­row but he had to wear it because it fit every­where else. It was the same for all of us…not a sin­gle mea­sure­ment was correct…nothing com­pletely matched one per­son. Mick’s trousers were rid­ing up above his ankles, but his waist was right. Any­way, we had to go on live tele­vi­sion look­ing more like a com­edy act than a rock band…we some­how got through it all, played the show and had a good laugh after­wards. The man­ager was pretty upset though…I wouldn’t have wanted to be in that tailor’s shoes the next day.