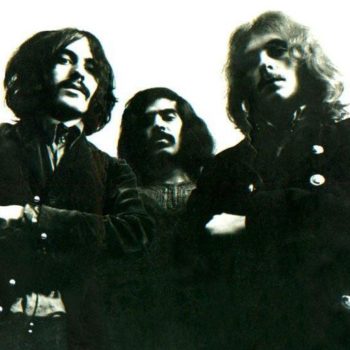 1967, London. This band was called “Sam Gopal Dream”. The original band that was all instrumental…I played bass and B3 (on the left), Mick Hutchinson played ragas on guitar (on the right), and Sam Gopal (center) played Tablas. We played all the Psychedelic London clubs including the “UFO Club” in Tottenham Court Road, “Happening 44”, “Electric Garden” later “Middle Earth” in Covent Garden, we played the 14 hr Technicolor Dream at “Alexander Palace” (our set began at 5am…John Lennon was there that night), “Christmas on Earth Continued 1967” with Pink Floyd, Soft Machine, Fairport Convention, Jimi Hendrix, Traffic. We all played the same clubs.
Jimi Hendrix sat in with us once at the “Speakeasy” in London…I looked up from the Hammond B3 I was playing and there he was playing Mick’s guitar and using the mic stand as a slide. Mick had handed Jimi his guitar and picked up my bass to play…Dave Mason came up a bit later.

Mick and I would often walk for 30 miles a day going here and there with our guitars…talking non-stop and solving the world’s problems…perhaps occasionally adding to them. At one point we were low enough on money and gigs that we decided to look for a temporary job of some sort. The hours were important because we needed the afternoons and evenings free to play music. We tried a few things…even working at the Vox guitar factory where they had me chiseling out pick-up holes on my first day there. I pity the poor bastard who bought that guitar…Mick’s job was guitar tester which basically meant he got to play guitar all day; he’d pretty much let anything go past (within reason)…fortunately for me. I got the hang of it pretty fast though….not that there was much skill in what I was doing. We knew the manager didn’t like us, not subservient enough to him, so we quit when we caught wind he was going to fire us…didn’t want to give him the satisfaction.

As a bass player the time I spent interacting with Sam’s Tablas was invaluable…and I still draw from those subtle bass Tabla rhythms when I get into a particularly free form jam with the right musicians today.
Playing those long improvisational instrumental sets with Mick and Sam in the original Sam Gopal Dream instilled in me the importance of becoming as one with your fellow musicians…to without thinking move instantaneously together like a school of fish…as one brain. Like a form of musical telepathy really. I remember one very long improvised jam we got into at “Middle Earth Club” in Covent Garden, London in 1967. We had always jammed off this particular theme in the key of E. I was playing a Hammond B3 for this tune, although I usually played my Gibson EB0 bass for most of the others. I was playing a Tambura type drone on the lower manual that Mick and Sam were improvising over, and my right hand was playing ragas. The audience was entranced…they were sitting cross legged on the floor with their heads down…I suspect as high if not higher than we were. Suddenly without any pre-arranged signals…Mick and I simultaneously moved up a half step to the key of F. No traditional musical cues to prompt the brain into a rule based diversion…nothing. Complete and absolute spontaneity. It hit us like an emotional hurricane…filling us with a warmth…a natural high…a musical rush. Mick, Sam and I all looked up at the same time…our eyes locked and tears welled up. I haven’t experienced that feeling to quite the same intensity before or since…although I’ve come close a handful of times. The climate you are playing in has to be just right…the audience, the club, a sense of unqualified musical freedom and the confidence and complete support of your fellow musicians. The listener feeds the band and the band feeds the listener…it’s cyclical.

I have lot’s more stories.