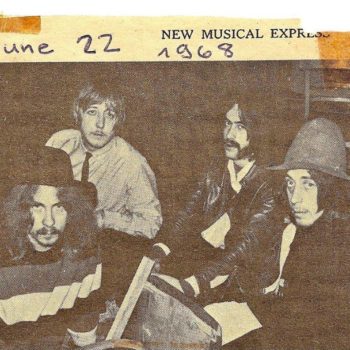 1968, London. This was a band called “VAMP” which stood for Viv, Andy, Mick, and Pete. Viv Prince from the “Pretty Things” on drums, Andy Clark on keyboards and vocal, Mick Hutchinson on guitar, and me on bass. We released a single in 1968 called “Floatin” on Atlantic Records through Screen Gems. Rhino Records re-released it on their 2014 compilation CD set called “Did That Underground Sound”.
I remember us sitting in this big-wig’s office at Screen Gems…and him bragging about how they’d made the “Monkeys” band out of nothing.
We didn’t really hit it off with their approach to promoting music and our one single didn’t do so well. We had recorded another tune which included Sam Gopal on Tablas playing along with Viv on drums…more like the jam approach of the original “Sam Gopal Dream…unfortunately it never saw the light of day and nobody knows where the acetate is.
We broke up soon after that…Mick and Andy started “Clark Hutchinson” and made some cool albums. I started my own band called “Giant” with Viv Prince on drums…I played lead guitar. Viv used to get a prescription for “Tincture of Cannabis” from a Dr. Dunbar in Earl’s Court. I remember dipping our cigarettes in the dark green liquid and baking them dry in the oven.
It was around this time that I met Lucy Daniel. We stayed together in the room she was renting in a house full of students in London. I remember one funny night when we lay there together listening to her roommate Sophie going at it all night with Al Wilson from “Canned Heat” who were touring England. They’d shown up in the early hours of the morning…stumbling around in the dark. A guy with long blonde hair…I think it was the guitarist Henry Vestine crashed on the floor. They were gone when we woke up in the morning.
I needed space to put my stuff so Lucy let me use a closet I could call my own. I laid down a mattress which didn’t quite fit, and put cardboard boxes full of my worldly possessions around the edges. I painted a mural of a Giant with one eye on one side…I used luminous paint for the eye. The band I’d started called “Giant” was managed by our old Sam Gopal Dream agent Alan Dale. Viv was out of the picture at that point…off in Morocco or something so I needed to find a drummer and bass player. I rented a hall with a stage in Ladbroke Grove London and placed an ad in the “Melody Maker” music paper. I was astonished when the appointed time came around and about seventy musicians showed up and lined up against the side of the hall…all waiting their turn to show me what they could do. I sat in the middle front of the hall, which was full of empty seats with my feet dangling on the chair in front of me and listened to one guy after another do his thing. I felt like a cliché yelling “Next”!!!.
One guy played drums very well so I hired him on the spot…John Boswell, he was personal friends with a good bass player Tony Savva who came with a Jaguar to get us to gigs…he was also a very good vocalist. I actually sang a bit (well, sort of) as well as playing lead guitar and B3. John Peel gave us a nice mention on his BBC radio show after a Roundhouse gig we played. I left the band soon after though…I had a lot of other things going on at that point. The manager had also driven off with the group van after a show, leaving us stranded in Newcastle. We had argued about money of course. He’d basically left us broke with no way to get back to London. Tony went to stay with friends, and John and I just started walking south…with 300 miles ahead of us. For hours we walked through the night in a cold sleet…past dirty factories still belching out black smoke from the industrial revolution era. We were flat broke and the first half of the journey was through the endless, empty wet streets of the north. The few cars that appeared in the early hours of the morning just roared on by our pathetic gestures for them to stop…some sadistically gave us another kind of sign. We finally reached a motorway and found a sympathetic lorry driver at a service station who picked us up and dropped us off in London in the early dawn.

I also met Jackie McAuley from Van Morrison’s band “Them” when he visited one of the other students in Lucy’s apartment building…we hit it off and he introduced me to original Fairport Convention singer Judy Dyble. We later started a band called “Trader Horn” but I left for the States before the first album. “Classic Rock Magazine” just interviewed me for a story they are doing on Judy. I had also been talking to several other possible bands as well. But California was beckoning with dreams of what might be.