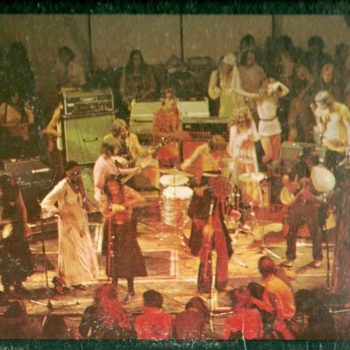 1970. Stoneground play at the “Roundhouse”, Chalk Farm, London. I’m playing bass next to the drums…with a black beard. Sal Valentino was the band’s main vocalist. George Harrison was recording “All Things Must Pass” with Phil Specter in the upstairs studio at Trident while we were recording downstairs. He had a crush on Lydia, one of our vocalists, and he used to come by this big old condemned mansion we were renting…seemed like a nice enough bloke.
We later flew back to San Francisco to open for the Grateful Dead on New Years Eve…”Fillmore” I think it was…or perhaps “Winterland”?
“Stoneground” recorded our first release in Hollywood with Tom Donahue and Ron Nagle producing. I later played a KSAN show with Ron.
Ron Nagle With Mick Waller, Dave Jenkins & Pete Sears…”Francine”.