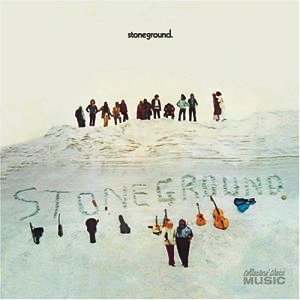 1970, France. Stoneground shoots album cover at “The White Sand Pit of Bourron” near Fontainebleau outside Paris. My English girlfriend at the time, Lucy Daniel, in a moment of inspiration carved out the name Stoneground in the sand with a shovel…it made the cover come to life. That’s us standing on top in the middle…Lucy also spoke fluent French, which came in handy getting around Paris. Like …the time a cab driver drove off with my bass in his trunk.Silver Metre had just broken up and I was living in England again when Tom Donahue asked me to play bass with a new band called “Stoneground”. We recorded an album at Trident Studios in London engineered by Bob Mathews and Betty Cantor (George Harrison was upstairs with Phil Specter recording “All Things Must Pass”, he liked Lydia, one of our singers and used to hang out at a big old abandoned mansion we were renting near London). We didn’t release it unfortunately but recorded another one back in Hollywood in LA after opening for the Grateful Dead on NYE. I liked the unreleased album better as it more accurately represented the band’s sound. The one we released was a bit overproduced and overdubbed to death (in my opinion of course).
We lived in a stately home near Canterbury for a while and played several shows including the “RoundHouse” in Chalk Farm London, and another festival with Pink Floyd.”Stoneground” was: Sal Valentino lead vocals and guitar, Tim Barnes lead guitar, John Blakeley guitar, Deirdre LaPorte vocals, Annie Sampson vocals, Lydia Phillips vocals, Lynne Hughes vocals, Luther Bildt vocals, Mike Mau drums, me on bass & keyboards.

I met Wavy Gravy, Jahanara, Milan Melvin, Morgan Upton…and everyone from the Hog Farm community at this time. Stoneground was their official band really. I played a show where Wavy got up to talk to the audience…the “Lyceum” in London I believe it was. He led the audience in these breathing exercises, causing mild to extreme hyperventilation to get them high. That’s when I first saw his special brand of interactive mind expansion.
He was the emcee at “Woodstock”, and without the Hog Farm that event might have gone in a very different direction.
Wavy began taking on a permanent “Clown” persona after being badly beaten by police at a peace rally…he figured nobody would hit a clown. He and Jah later started the amazing “Camp Winnarainbow” in California; an accredited children’s summer camp that teaches theater and circus skills…both my kids went there, as did Bill Graham’s.
Wavy used to visit children’s cancer wards in his clown gear to try and bring some light into their lives. We have worked on many projects together over the years, including various live poetry recitals while I played improvised piano…like the one we did for our dear friend Floyd “Red Crow” Westerman’s “Longest Walk” benefit.
Floyd was a Dakota Sioux activist and musician…he also acted in several films including playing the part of the chief in Kevin Costner’s “Dances With Wolves”. Floyd passed away in 2007.
Wavy Gravy also recited a beat poem on my solo album, “The Long Haul”.
I’ve played at many benefits for SEVA, an organization that restores sight to people in India. It was started by Wavy, Jahanara, Dr. Larry Brilliant, Girja, and several other ex hog farmers.
Stoneground also played in Paris, France, and did a couple of French TV shows; one where I jammed Indian ragas on the bass with classical violinist Yehudi Menuhin…which is hard to imagine I know; I can scarcely believe it myself. A young bearded rock musician in a fringe deerskin jacket wielding a Gibson EB0 bass guitar…and a smartly dressed classical violinist with his priceless Stradivarius, improvising ragas together…just the two of us on live TV. Wish I could find a copy of the show…I think?

We were once arrested in Scarborough on the north east coast of England on suspicion of drug possession after the Canterbury police tipped off the local police force. They surrounded our van after our show and escorted us to the police station but were unable to charge us with anything as we ate the evidence before they could find it. They became very frustrated and knocked Sal Valentino around a bit trying to find out where we’d hidden the drugs. The show that night had been a bit bizarre anyway due to several IRA bomb scares throughout the evening…we had to stop playing and clear the club twice in one evening.

It was while Stoneground was renting a house in Mill Valley in 1970 that I met John Cipollina for the first time, and went to see him at his house on King Street in Mill Valley. We hit it off and talked about getting a band together one day. I had to go back to England to record on Rod Stewart’s “Every Picture Tells a Story” first. It was at this time John introduced me to Jerry Garcia and Bob Weir when we did a live jam from the KSAN FM rock Radio record library on Sutter in San Francisco. John’s younger brother Mario played bass, Jerry played Pedal Steel, Bob rhythm guitar and vocals, John lead guitar, and I played an old upright piano they had. It was on my friend DJ Richard Gossette’s show. There’s a bootleg of the broadcast knocking around somewhere.
I also met my future wife to be Jeannette at John’s house on King St. I was with my English girlfriend Lucy, and Jeannette was going out with Jim Murray from Quicksilver. It was several years before Jeannette and I got together. Jeannette and Lucy (a BBC writer and published author who lives in England) are still close friends to this day.
I became friends with John’s good buddy, Mark Unobsky at this time…we stayed close until he passed away many years ago. Great blues guitarist.
So I got Mario a gig to replace me in Stoneground so I could go back to record with Rod. Then I came back to the USA with the “Long John Baldry Blues Band”. What a band that was. I loved playing with John. Then I went up to San Francisco with drummer Micky Waller. I moved into John Cipollina’s gun room at his house on King St. Our band had no name at that time…John eventually came up with the name “Copperhead”. I performed and rehearsed with them for many months…we did the Pepperland Ballroom in San Rafael, a KSAN live broadcast from Pacific High Studios with Tom Donahue as our radio host.
I later left Copperhead to go back to England and play with Rod Stewart on “Never a Dull Moment”…and Nicky Hopkins had asked me to play bass and some B3 in a band he was getting together. He rented me a house in Mill Valley while he was on tour with the Rolling Stones.
After I left the band, Copperhead found bassist Hutch Hutchinson…an amazing musician.

While Nicky was on tour with the Stones and paying my rent, I went ahead and got my pilot’s license. Crazy Times.