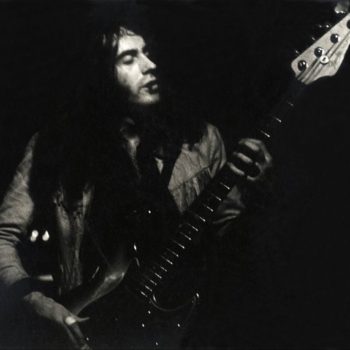 1971-1972. Me playing my trusty old 63 Jazz bass with “The Long John Baldry Blues Band” somewhere in America in 1971. I enjoyed playing with the band immensely but Micky Waller and I later left to move to California. Earlier in 1970, when I was still living with “Stoneground” in Mill Valley, I had talked with John Cipollina, whom I’d just met, about forming a band together sometime. When I got back from Long John’s tour I moved into John Cipollina’s antique gun room at his house on Ethel in Mill Valley. We rehearsed in the old white Quicksilver house up on the hill in Corte Madera and recorded and played many shows, including Pepperland, and a live KSAN broadcast with Tom Donahue.
John eventually came up with the name “Copperhead” and we played quite a few shows, and rehearsed an awful lot.

I left the band just before they recorded their first album to fly back to England to record “Never a Dull Moment” for Rod Stewart, and to fly back to Mill Valley after a couple of weeks to take possession of a house Nicky Hopkins was renting for me on Melrose Ave in Mill Valley (I couldn’t wait around for Rod’s inside cover shot on the football field…hence my name under the football . It was 1972. Nicky wanted me to play bass and some double keys in a band he was planning on getting together; he’d asked me while I was still with “Copperhead”. I stayed in the house for three months while Nicky was touring with the Rolling Stones… but Nicky decided he’d had enough of the road life when he returned and the band never happened. I found out years later that the drummer would have been Prairie Prince who I later worked with in the Steve Kimock Band. For the first time in my career, I hadn’t had anything to do while I was waiting for Nicky, who apart from sending me a salary was also paying my rent, so I fulfilled a lifelong dream and learnt to fly airplanes… later getting my pilot’s license and flying old open cock-pit bi-planes. I was even a member of the Tiger Club at Redhill in England at one point and checked out in ACDC, the oldest flying Tiger Moth in the world.
My future wife Jeannette and I got together to write a song while I was staying in this house in ’72… a serious seed was sown that day.

I produced a side for a Terry Dolan album that never saw the light of day…Nicky Hopkins had produced the other side. Pity…it was a good album which had some great songs Terry had written.
“Big Brother” talked to me about working in the studio with them…and we played a few shows up north, including Seattle. Kathi McDonald sang with them.
Soon after Nicky decided not to get a band together (he never did) I formed a band with Greg Errico, drummer from Sly & the Family Stone, and guitarist Neil Schon. The band was called “Sears, Schon, Errico” and we played several shows instrumentally including the Diamond Head Crater Festival in Hawaii. After co-producing, arranging and playing on Kathi McDonald’s “Insane Asylum” album which was released on Capitol Records, I flew back to England to record piano on Rod’s “Smiler” album.
I also wanted to look for a little cottage in the country while I worked with Rod…and fly Jeannette over to England from the USA.