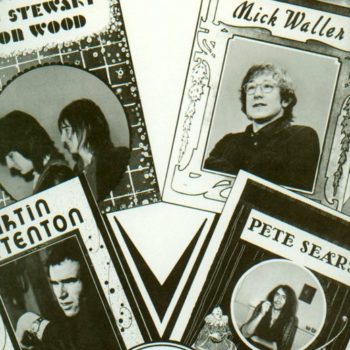 This was the third solo album by Rod Stewart, and the second one I played on, released in the middle of 1971. It became Stewart’s most critically acclaimed album, and for many became the standard by which all of his subsequent albums were judged.
I played all the piano on the album including the title track and the single “Reason To Believe” . Except for one track, “I’m Losing You” which featured Ian McLagan on piano, along with the Faces as a band. Ian also played B3 organ on a couple of tracks, and Micky Waller drums except for the Faces track “Losing You” which featured Ken Jones. Ron Wood played lead guitar on everything, Martin Quittenton acoustic guitar and many special guests including my old Long John Baldry Band-mate Sammy Mitchell. Maggie Bell sang. Sometimes both Martin and Ron would played acoustic guitars together.

It reached the number-one position in both the UK (for six weeks) and the US (four weeks) at the same time that “Maggie May” was topping the singles charts in both territories, making Stewart the first artist to achieve such a feat. It has often been voted among the best British albums of all time.

In 1992, the album was awarded the number-one spot in Jimmy Guterman’s book The Best Rock ‘N’ Roll Records of All Time: A Fan’s Guide to the Stuff You Love.

In 2003, the album was ranked number 172 on Rolling Stone magazine’s list of the 500 greatest albums of all time.

Every Picture Tells a Story was ranked 99th in a 2005 survey held by British television’s Channel 4 to determine the 100 greatest albums of all time.

In 2009 the song “Every Picture Tells a Story” was used for the soundtrack of Rockstar Games’ “Grand Theft Auto IV: The Lost and Damned”. This album sold 4 million copies worldwide.