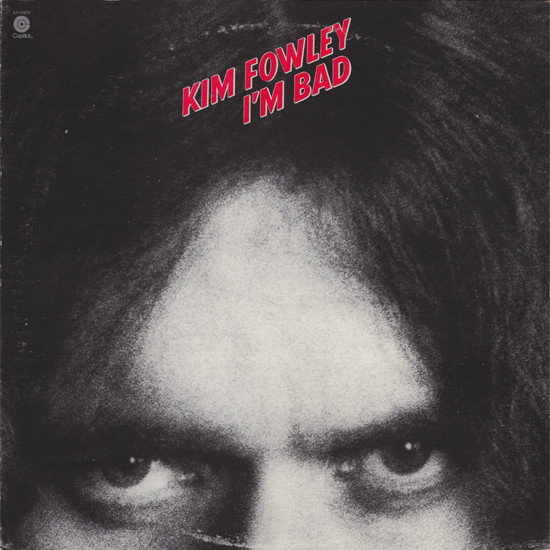 I played piano and bass on this album recorded at “The Sound Factory” in Hollywood, California. It was produced by Jeffrey Cheen and engineered by Dave Hassinger for Capitol Records. Kim is one of the more prolific and colorful characters in music…just Google his name.
I remember one session for the album when a musician’s union guy came round to check that everyone was in the union…they sometimes did that back then. We were in the middle of a take when the engineer got a call from the front desk that a union guy had just come through the front door. Except for touring with British bands when I would have an H1 work visa, I was still working under the table in those days…and everyone at the session knew it. The engineer warned us through the talk-back, so we launched into the loudest, most obnoxious slightly out of tune rock n roll we could summon (which wasn’t difficult for us) and the engineer turned the volume in the control booth up to eleven. The union fellow, wearing a slick three piece suit, sat down and waited for us to finish…it must have been hellish for him; he looked like a jazz cat. We could see him just behind the studio window sitting on the sofa in front of the recording console looking very uncomfortable, and slightly pissed off. We just kept playing as loudly as possible until the poor guy couldn’t take it anymore and left in disgust…no doubt wishing he could chuck everyone in the studio out of the union. That was a close call.
After recording we’d often go down to Sunset and hang out with people like Rodney Bingemheimer…or Micky Dolenze of the Monkeys.
1972 was a weird time for me to be in Hollywood actually. I felt a disconnect to reality…like I was adrift on a dark sea of superficial human interaction. I sensed a light or some sort of epiphany beckoning just below the surface of my consciousness.
In spite of working all the time, and plenty of attention from the female persuasion, it was really a very low point in my life. My home base had firmly become the San Francisco Bay Area by now, and I only visited Los Angeles when I had a project to work on.
LA has this explosive energy swirling around its core that can hold you in overdrive, skimming you across a surface of endless parties, clubs and shallow relationships. However, it’s an energy that can blow up in your face, as I’ve seen it do for many a poor soul trying to make a go of it in music or the movies.
Having said that…I did have some very cool times in the “City Of Angels”.
Thanks to the phenomenal success of “Gasoline Alley”, “Every Picture Tells A Story” and “Maggie May”, Rod had become a giant mega-star by now, and I certainly enjoyed hanging out in LA and being associated with those albums.
I remember checking out a new Reggae film at a private theater in Hollywood when Keith Richards came swaggering in clutching a bottle of Jack Daniels. It was a cool film. I didn’t actually meet Keith until years later when I was backstage at a Stones show in San Francisco…Ron took me to meet him in his dressing room…seemed like a nice bloke. I met him backstage on several Stones tours. Very down to earth actually…and with a wry sense of humor. The backstage area was like Fort Knox. You needed a special escort from the V.I.P tent to get into the inner sanctum where the band and family actually hung out. I remember this tent was set up for family and close friends that looked like it belonged in the Arabian Desert instead of Pac-Bell Park where the show was being held. It was hung with beautiful shawls and drapes, and Persian carpets lay everywhere. Giant platters of fruits and exotic meats filled the tabletops.
Ron showed me into Keith’s nearby dressing room and I remember thinking this guy may be in one of the most successful rock bands of all time…but he didn’t seem to have any airs…he’d come up through the trenches of South London like me. To confirm my suspicions he opens up a small can of some sort of meat stew, heats it up, dumps it out on a paper plate and begins shoveling it into his mouth with a plastic fork…in spite of having a banquet fit for a Viking king just twenty feet away. I have always liked Keith’s blues roots…he’s a wonderful guitarist with his own sound.
I’m sure he has his down side like us all…but Keith is rock n roll really.