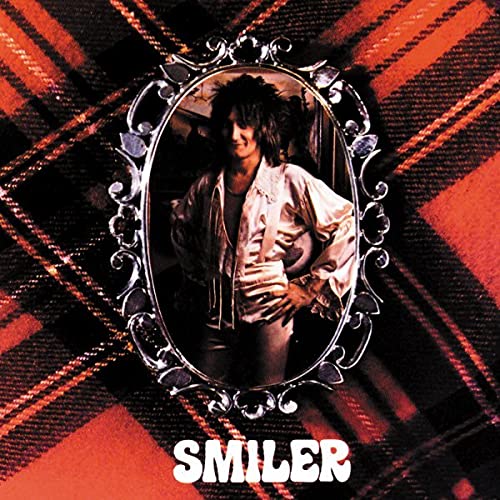 My last of four albums with Rod and the last he made with the same group of musicians he’d been using since “Gasoline Alley”. After “Smiler”, Rod switched studios from Willesden, London, to the USA for “Atlantic Crossing”. “Smiler” took a year to make due to various production hold-ups, but produced “Sweet Little Rock n’ Roller” one of my favorite Rod Stewart tracks.
Micky Waller sometimes brought his beloved Boxer dog Zak to the studio and would sit him next to his drum kit. Just as Ron Wood launched into his opening Chuck Berry style guitar licks, Zak decided to get in on the fun and began barking like mad, creating this sort of back n’ forth guitar and barking musical jam for the intro.
We all resisted the urge to roll on the floor in hysterics and carried on with the recording as Zak stopped barking on cue at the end of the intro.
Rod thought it sounded so cool on playback that he decided to use the track. I played piano on that one.
I spent a night in the studio with Rod, his engineer Mike Bobak, and Paul and Linda McCartney while they recorded “Mine for Me”…Linda was friendly, and Paul seemed like a nice bloke. I played Celeste on that track. I also connected with Wayne Jackson of the “Memphis Horns” during that album.
I brought my American girlfriend, Jeannette, over to England to live with me that year. I’d meant to find a little cottage on the cliffs overlooking the sea for us to live in…but settled for a cottage in the beautiful village of Westerham in Kent.
We were pretty broke at the time as there were long gaps between sessions, and all my money went on paying rent…but we loved the place, and would have tea and scones at “Pitts Cottage Tea House” and fish and chips for dinner.
We’d sometimes wake up in the middle of the night (very cold nights…ice or snow. I’d have to park my little Ford on a hill to jump start it) and go searching for a chocolate machine that wasn’t empty…we’d sometimes drive for miles. Low on petrol…but having fun.
The bedroom upstairs had an old fireplace where we’d burn a hot coal fire, radiating warmth on a cold and stormy night. But the house was so old and leaky the heat could only penetrate the air a few yards, and we had to huddle around the fireplace talking or reading a good book. It was okay in bed with the warmth of our bodies to stave off the cold…and even though the heat from the fire didn’t reach us, we could still bask in its cozy and comforting glow.
The place was rented to us by a wonderful old couple named Joe and Elsie Morton who lived in a six hundred year old cottage in the village of Limpsfield, Surrey…the next county over. We’d visit with them once a week when we’d drop by to pay the rent…lots of cups of good strong English tea while sitting on ancient benches actually in the fireplace itself. They once casually talked about how they were sitting having a cup of tea in their back garden during WW2’s Battle of Britain air war when a Luftwaffe fighter strafed their garden.
They were part of an unstoppable generation.
We stayed in touch for many years, even after Joe lost his Elsie. Then the Christmas cards stopped coming one year.

One day we received a letter from Joe’s son saying that Joe and Elsie had always talked about how fond they were of us so he felt he should let us know what had happened to Joe.
Basically, several cowardly thugs had broken into his little cottage, the home where Joe was quietly living with his memories and seeing out his final years, and beat him up; badly…just to steal whatever they could lay their grubby little hands on.
I feel sick with emotion every time I think of this kindly old man who had a wonderful sense of humor, was willing to rent his cottage to a long haired young rock musician, was extremely intelligent, went through two world wars, fighting in one, and near the end of his life when he was frail and old, being beaten around the head by young punk skin heads or whatever sick beings they were. Joe’s son said in his letter that the attack broke Joe’s spirit and he was never the same after that. I lost the letter during a move…I would like to contact Joe’s son again someday.