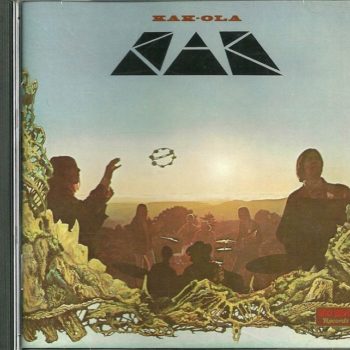 KAK Lead vocalist and rhythm guitarist “Gary Yoder” included a track on this CD from his solo album called “Flight From The East”, which was recorded right after KAK disbanded.
It was recorded in Los Angeles for Epic Records. Gary on vocals and rhythm guitar, I played keyboards, Bryn Haworth (my old band-mate from Fleur de Lys 1966 England and later Jackie Lomax) on lead guitar, Paul Whaley (Blue Cheer) on drums, Billie Barnum (of the Blossoms) on back-up vocals.

The track was produced by Milan Melvin. As Gary writes on the CD liner notes:
“The solo single happened right after the demise of KAK. I asked Epic if I could cut a record just to see where it would go, hoping I would get a LP contract. I had met Milan Melvin at a session for Leigh Stephens, so I asked him to produce, and we went ahead. I was living down in Santa Monica on the pier, there’s a knock on the door and this scruffy Englishman Pete Sears is there. Then Bryn Haworth shows up a little later, and Keylor and Whaley (Blue Cheer drummer) were around too, so I used them all on the single”.

I guess I must have looked pretty scruffy in those days, 1969…I was twenty one years old and had only been in the states for a couple of months living in Venice Beach and above the merry go round on Santa Monica Pier. I was staying with Leigh Stephens (Blue Cheer) and his old lady Liz. Leigh and I were forming a band with Micky Waller (Jeff Beck) and Harry Reynolds which ended up being called “Silver Metre”. We’d rehearse all night long in the Whale rehearsal rooms underneath a bar on a pier in Venice Beach that later burnt down. That was when I first met super groupie “Zani Dani”….who recently passed away, God rest her soul. — with Bryn Haworth and Gary Lee Yoder.