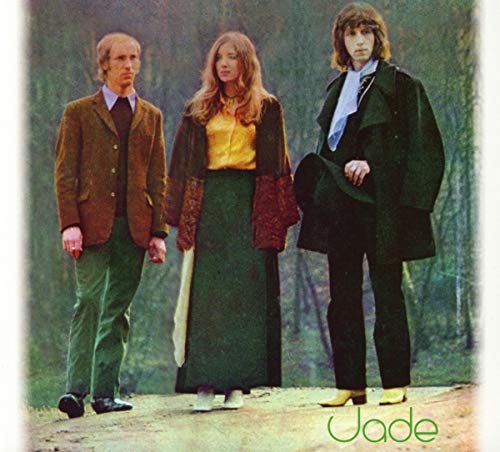 This is a reissue CD from the original LP recorded in 1969 and released in 1970. I was hired as a session musician just before moving to the USA.
This CD includes two cool bonus tracks from an unreleased single that the band “Jade” recorded in 1971…John Wetton (King Crimson, Family) plays bass. I played bass on all the tracks of this album which was released the following year: I used a Gibson EB0 which I played a lot back then…as well as my Jazz. This was right up there as one of the favorite sessions I have ever played on. The band “Jade” consisted of Marianne Segal (beautiful folk singer and writer), Dave Waite (ex Countrymen) and Rod Edwards (Piccadilly Line). Terry Cox from “Pentangle” also played on the sessions, and Elton John’s manager Jon Miller produced the album. I played all the bass as a session musician (that’s me sitting back on the left with some stubble and a joint sticking out of my mouth). Some of the other session musicians included Micky Waller (Jeff Beck), Pete York (Spencer Davis), Michael Rosen (Eclection), Jimi Litherland (Jon Hiseman’s Colosseum). If you can find one of the original LPs in good condition today they sell for quite a bit of money. An updated version of the album was released several years (I was living in the California by then) later that included a couple of bonus tracks that I didn’t play on.

Quote:
“One of the great albums of the British folk rock boom of the late 60’s is this sole 1970 album by Jade. Comparable to Sandy Denny’s solo albums and recordings by folk rock contemporaries, such as The Trees and Mellow Candle, this lost masterpiece has been restored and re-mastered from the original tapes with the addition of bonus material and detailed historical notes.”

I was talking with various bands about possibly playing with them. Mitch Mitchell who was still with Hendrix asked me to play bass in a band he was getting together…said he’d seen me play with Sam Gopal Dream. Mitch took me back stage to a Royal Albert Hall show they did…I remember this beautiful woman dressed in an elegant 1920’s style dress yelling at the guard outside Jimi’s dressing room “I’m his old lady, let me in!”.
I’m sure she was his old lady…but the guard wasn’t impressed; he took his orders directly from Jimi.

I knew Jimi a bit from my meeting with him in Eric Burdon’s kitchen when Chas Chandler first brought him over from the USA, and later when Sam Gopal Dream played some of the same shows in 1967…he once sat in with us. I’m fact this is how I knew Mitch.

I found out years later that they were having trouble with Noel Redding at the time…hmmm? No…couldn’t be, no way.

I remember watching the show from the back of the hall…Jimi was playing as wonderfully as always, but seemed a bit sullen. The audience was calling out for their favorite songs as usual. One guy kept yelling , “Foxy Lady!”

Jimi stopped and told the audience he wasn’t going to play any more hits that night. “I just want to play the blues” he said.
He proceeded to play some of the coolest blues guitar I’ve ever heard.
Mitch was an amazing drummer who helped bring a jazz sensibility to rock…it always astonishes me that he never really went on to do anything else after the “Experience”. I know he lived in Jamaica for a while. I spoke with Mitch in London a couple of days after Jimi died…it hit him hard. They were very close.

I played a show on piano with Dave Hidalgo of Los Lobos at Yoshi’s in Oakland a couple of years ago and we talked about Mitch. Dave had just got off the Jimi Hendrix tribute tour, of which Mitch was a part. Dave was saying what a cool person he was. Mitch passed away soon after.
I had other irons in the fire in 1969. I hung out a bit with John Mark (John Mayall’s guitarist) and we talked about me playing bass in a band he was putting together with Johnny Almond; and my friend Pete Brown (Cream Lyricist) had put me in touch with Jon Hiseman’s Colosseum who were looking for a bass player. I also started rehearsing on bass and Hammond B3 with original Fairport Convention vocalist Judy Dyble and Jackie McAuley from Van Morrison’s “Them”. That band became “Trader Horn” which ended up making a very cool album. I was recently interviewed by “Classic Rock Magazine” for a piece they did on Judy.

I also walked through the streets of London to a small back street rehearsal room just south of the river Thames to jam with Arthur Brown (who used to light his headdress on fire with lighter fluid and sing his classic song “Fire”) He was a great talent and a cool fellow. It was snowing and very cold that night. We had a good laugh a few years later when he told me on the phone that he was living in a little village called “Puddletown”. Now Puddletown is actually on the river “Piddle” and used to be called “Piddletown”, until the local village council voted to change the name officially to “Puddletown”. This was due to the embarrassing and undignified nature of the name. Piddle in England is slang for urinating. Very Monty Python.

However, California was calling and I gave it all up and went off to the USA for the first time to join up with Leigh Stephens (Blue Cheer) and Micky Waller (Jeff Beck) to form Silver Metre in Venice Beach, Los Angeles, California. I stayed above the Merry Go Round on Santa Monica Pier for a while…foggy old London town to the boiling hot California summer of 1969, it was all very surreal.