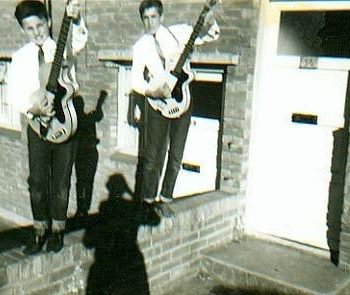 1962, Hayes, Bromley, Kent, England. My first school band…”The Strangers”, with my mate, Terry Brown. I’m on the right of photo with Terry’s mum’s shadow looming between us. We both played a Hofner Club 40…mine cost 15 Pounds at Selmer Music

in Charing Cross Rd in London…”Tin Pan Alley”. Our first gig was at school and the kids went wild…even though we both played through one amp, and only knew a couple of tunes. It sowed a seed when I saw Joyce Goram and Deidre Bray waiting for us in the wings as we left the stage…this band thing has possibilities.

I soon formed another band with my school friend Stuart Vincent who lived in Biggin Hill…the town that hosted a famous WW2 fighter base during the “Battle of Britain”. We called the band the “Spitfires” after the famous fighter plane that helped save our necks. We played at the Biggin Hill Youth Club…and I remember everyone watching out for the infamous rocker (what we called bikers back then) “Pansy Potter” who used to like throwing people through windows (mostly the “Nightingale Cafe) for no apparent reason.

We also played “West Wickham” near my hometown of Hayes near Bromley. David Jones used to sing and play this mother of pearl alto sax with a group called the “Konrads”…he later changed his name to David Bowie; he had tremendous talent even back then. I became good friends with George Underwood who also played with David for a while, and he would sometimes sit in with us. He went on to paint some of the most memorable album covers of the 1960’s including T-Rex, David Bowie, Ziggy Stardust, Procol Harum, and Marc Bolan.

Peter Frampton was also on our local scene as a young guitarist playing with a band called the “Truebeats”.

It was basically South London.

We all went off in our different directions as professional musicians. Me in 1964.