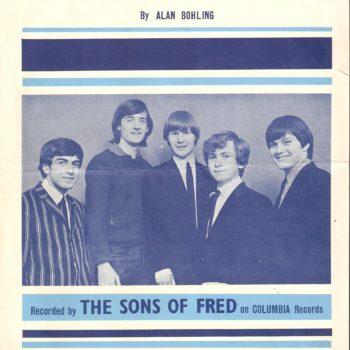 I began playing with the Sons of Fred in 1963…we turned pro in 1964. That’s me with the weird striped jacket on the left. We recorded at E.M.I (later Abbey Road) in London for the E.M.I. Parlophone label, and toured all over playing six or seven nights a week. We played a few TV shows, including “Ready Steady Goes Live” and “Thank Your Lucky Stars” and were even mobbed by a large group of screaming girls as we came out of a TV studio (I doubt they knew who we were, but we looked like a rock band and were coming out of a TV station) there was a police cordon and everything…my jacket was ripped up pretty good.

We got into our old Mark 10 Jaguar that was covered in women’s lipstick (we actually had a lot of fans) and hightailed it to the M1. It was an old Jag but went like a bat out of hell…we had to hold the stick at 110 mph or it would slip out of top gear.

We performed primarily R&B music live, but our singles were a bit more pop except for “Baby What You Want Me to Do”.

Not sure where the money went…certainly not in our pockets, well not mine anyway

Ray was very innovative and amazing with engines, and somehow always got us to the gig even though our old van would sometimes break down in the snow…or overheat.

He once used a women’s stocking (which was lying in the van for some reason) to fix a broken fan belt. Another time he used a coat hanger to fix the broken bolts no longer holding our drive shaft together (he wound it in and out of the bolt holes and we limped slowly to the gig).

We often had to set our gear up on stage in front of a jeering drunken crowd if we got there late, sticking bare amp wires into live plug holes by forcing a screwdriver into the ground pin. All this on a darkened stage and working with 220 Volts.

We took turns sitting or lying on the amps in the back of the van on long journeys.

Another time we set up our gear (we carried our own Selmer PA system and amps) on the back-side of a revolving stage at Streatham Ice Rink in South London while another band played their set in front facing the audience. We had everything set and all the wires, drums and amplifiers in place when we got the signal to begin playing.

As the other band finished their last song, the stage began to slowly turn with us gradually appearing to the audience…supposedly playing a song. A toothless unshaven old man with a peaked cap and overalls was running the stage revolving mechanism with a lever off to the side…we already knew he couldn’t stand the site of us…and he was about to prove it. He looked like he’d worked there since the glory days of Vaudeville.

As the stage began to turn, we noticed that one or two of the wires running to the PA system were getting caught up in something and the speaker cabinets were beginning to topple. We started frantically signaling to the old man to stop the stage from turning, “Stop, stop” we yelled, “for &%@$ sake stop the stage”.

The old man just kept this little smirk on his face, stared straight ahead and continued to hold down the lever in the on position. The situation got out of hand and snowballed fast…amplifiers came crashing down, our legs and arms got caught and tangled up in wires, the drums crashed down into a heap on the floor with our drummer Tim somewhere in the middle. “Stop! stop!”.

We carried on slowly turning towards the audience who watched us with curious perplexed expressions on their faces…wondering if it was part of our act or something. Anyway, we eventually sorted it all out, and apart from a few bruised legs and egos we finished what was left of our set time.

Around 1965 we’d drive down Somerleyton Road in Brixton, South London and groups of African or West Indian guys, mostly Jamaican, would be standing outside each house with a giant chunk of Hashish each. They’d see a group van and run after us yelling for us to buy from them…”Hey mon…here, here, over here”.

We’d mostly come away with a good deal…I mean a very good deal, but sometimes we felt lucky to get out of there with our lives. This all happened a few blocks away from Brixton Police Station.

The old buildings in Somerleyton Road have all been torn down now. My dad used to drive my family through Brixton on his way to the center of London from our house in Bromley. I was a kid, and I’d hear this amazing music pumping at high volume out of “Desmond’s Hip City” record store underneath the arches. Blue Beat, Skar, Rock Steady then Reggae. Every time we drove past the shop I’d open my window so I could hear better…I was mesmerized.

Another time, we were booked to play the prestigious TV show “Ready Steady Goes Live”. Our manager announced to us one day “you boys look too scruffy for TV; I’m going to send you to a Denmark Street tailor and have you fitted for matching blue suits.” I personally didn’t see what was wrong with my striped jacket and blue jeans…but hey, if that’s what it takes so be it.

We walked up this small creaky old staircase to the tailors on the second floor and this little man, all bent over and looking like he belonged in a Charles Dickens novel started measuring each one of us in turn; writing down our information in a little book. He didn’t seem to like us very much, but assured our manager that the suits would be ready in time for the big TV show.

Well the big day arrived and of course the suits hadn’t arrived at our office yet. Our manager was told they would be dropped off at the TV studios that afternoon…in time for the show, but they still hadn’t arrived for the afternoon dress rehearsal and he started having a fit, telling us we wouldn’t be able to go on looking like we did. It was all very disturbing…and things got quite tense as show time loomed closer and closer and the suits still hadn’t shown up. Well they finally did show up about an hour before our time slot to hit the stage and we all grabbed the brown paper bag that had our name on it…they were tied with old pieces of fraying string. We started frantically pulling on our suits as the minutes to air time ominously ticked away. Gradually, one by one, startled curses, grunts and swearing noises began to fill the room as we struggled to get our brand new matching blue suits to fit. Slowly, it dawned on us that the idiot tailor had either made a terrible mistake, or had purposely got all our measurements completely mixed up. My trousers were too long and my sleeves too short. The shoulders of Ray’s jacket, he was a big fellow, were too narrow but he had to wear it because it fit everywhere else. It was the same for all of us…not a single measurement was correct…nothing completely matched one person. Mick’s trousers were riding up above his ankles, but his waist was right. Anyway, we had to go on live television looking more like a comedy act than a rock band…we somehow got through it all, played the show and had a good laugh afterwards. The manager was pretty upset though…I wouldn’t have wanted to be in that tailor’s shoes the next day.

I have more Sons Of Fred stories…but it’s getting late. Maybe I’ll add some at a later date if anyone’s interested.